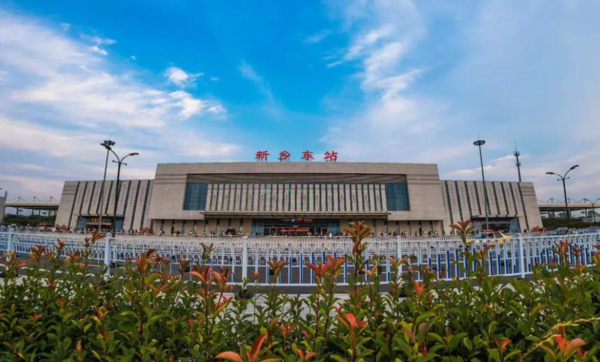 Its population was 5,707,801 as of 2010 census of whom 2,596,759 are in the built-up area made of 4 urban districts (Weibin, Hongqi and Muye). And, as the city is expanding very quickly, Fengquan district, Xinxiang county and Huixang City are now being urbanized.

Xinxiang was site of the Battle of Muye where the Shang Dynasty was overthrown by the Zhou. Xinxiang dates from the Sui dynasty (581-618) and was a small market center before being developed as an industrial center in the 1950s. It also served as the capital of the short-lived Pingyuan Province, which covered neighbouring cities Anyang, Hebi, Puyang, Jiaozhuo and Heze, between 1949 and 1952, for the purpose of exterminating Nationalist guerillas.

The Roman Catholic minority (no statistics available) is served by its own Apostolic Prefecture of Xinxiang 新鄉 (中文) / Sinsiang / Sinsiangen(sis) (Latin), which was established on July 7, 1936 (1936.07.07) on missionary territory split off from the then Apostolic Vicariate of Weihuifu 衛輝府 (now Diocese of Jixian). It is a pre-diocesan jurisdiction, which is exempt (i.e., directly subject to the Holy See and its missionary Roman Congregation for the Evangelization of Peoples), not part of any ecclesiastical province.

Xinxiang is the headquarters of the 83rd Group Army of the People's Liberation Army, one of the three group armies that comprise the Jinan Military Region responsible for defence of the Yellow River Plain.

Textiles and processed food are major manufactures. It has a large number of heavy industry in machine making. As an old textiles basement, the cotton industry is very developed in Xinxiang.

The city is a rail junction and industrial centre at the head of navigation on the Wei River (Shandong) (卫河). The river, made navigable for small vessels by river improvements in the 1950s, links the city with Tianjin, the main port for Beijing. Later, due to heavy industrial chemical pollution, the river course had been totally cut off and got filled up. After recent dredges, it is still no more than a man-made lake.

There are several universities and colleges located in the prefecture-level city.

Xinxiang University: newly combined university located in the eastern part of Xinxiang, it has 21 faculties and 3 centers

Henan Institute of Science and Technology