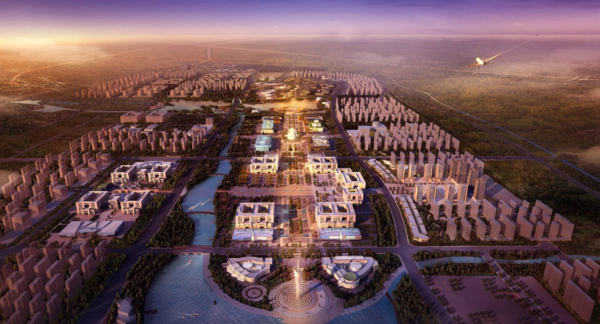 Puyang is a prefecture-level city in northeastern Henan province, People's Republic of China. Located on the northern shore of the Yellow River, it borders Anyang in the west, Xinxiang in the southwest, and the provinces of Shandong and Hebei in the east and north respectively.

The prefecture-level city of Puyang administers 1 district and 5 counties.

Affected by the south-east Asian monsoon circulation around the year and located in the mid-latitude region, the city is categorized as the warm temperate continental monsoon climate which features clearly demarcated seasons. In spring, it is usually dry, windy and sandy. High temperatures and heavy rainfall mark the whole summer. In autumn there are plenty of sunny days as well as long periods of sunshine. In winter, it is characterized by less snow and rainfall. The adequate sunshine meets the needs for crops growing. The annual average temperature stands at 13.3°C, the highest of which reaches 43.1°C, the lowest -21℃. The non-frost period lasts 205 days. The annual precipitation is around 502.3mm～601.3mm.

Burial site of Yangshao culture features a depiction believed to be an ancient cosmogram depicting the round Heaven and the square Earth.

A time-honored city in Henan Province, Puyang abounds with its historical and cultural heritage, and is widely acclaimed as one of the birthplaces of the Chinese nation. The Classic of Poetry, the earliest collection of verses in China, includes many poems that depict the countryside of Puyang. Famous historical figures from Puyang include Wu Qi, a military strategist, Shang Yang, a statesman, and Lü Buwei, a great thinker.

During the Three Kingdoms era, Puyang served as Cao Cao's headquarters from 191 until 196 CE in Yan Province and served as the battlefield for the Battle of Yan Province from 194-195 CE.

Qing Dynasty and Republic of China

Puyang was a county of Daming Prefecture, Zhili province. In 1928, Zhili was abolished and Puyang was incorporated into Henan province.

In August 1949 Puyang was taken back from Henan and included in the experimental province Pingyuan. In November 1953 it was finally reinstated under the Henan administration.

In 1987 a historical relic, made up of a series of clams arranged in dragon patterns, was unearthed. The valuable discovery, which could be dated back to more than 6,400 years ago, had pushed forward the history of Chinese civilization for over 1,400 years, and therefore earned itself an international reputation of “the First Dragon of China”. The Chinese Yanhuang Culture Researching Association has accordingly named Puyang “the Hometown of Chinese Dragons”. Abundant heritage along with a long history has endowed Puyang with plenty of tourism resources, which is certainly of great investment value. Chinese scholars therefore regard Puyang as one of the important birthplaces of Chinese civilization.

Puyang is a petrol-chemical city. The major mineral resources include petroleum, natural gas, coal, etc. especially rich reserve of high-quality petroleum and natural gas. As an important national petrol-chemical energy base, large-sized enterprises such as Zhongyuan Oilfield, China Petroleum & Chemical Corporation, Zhongyuan Dahua Group and so on have been established there. The petrol-chemical industry has become the support of Puyang’s economy.